Automakers assemble more than 85 million new cars and light trucks each year, worldwide. Building new plants and maintaining their existing ones requires more than $160billion of dollars of investment each year.

A recent study by the European Commission examined the capital investment (plants and equipment) by more than 2,500 of the world’s leading companies. The study found that automakers and their suppliers spent more on capital investment than electrical utilities, telecommunications companies, electronic and electrical manufacturers, chemical manufacturers, and software and computer services companies. 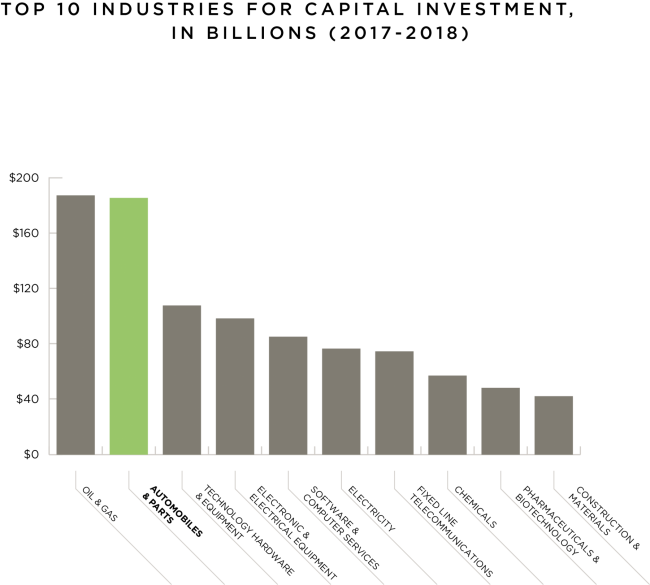 Domestic and foreign automakers announced investments of $57.1 billion in their U.S. assembly, engine and transmission plants, R&D labs, headquarters, administrative offices, and other facilities from 2013 through 2018.

FCA US, Ford, and General Motors made more than $34.0 billion of those $57.1 billion (about 60%) in investments. Their announced investments in U.S. facilities are four times greater than all Japanese and Korean automakers combined. Together, Toyota, Honda, Nissan, Subaru, Mazda, Mitsubishi, and Hyundai-Kia announced only $8.5 billion during this same six-year period. American automakers’ investments are nearly four times greater than the combined investments of the four major European automakers competing in the U.S. (BMW, Daimler, Volvo, and VW). Together, they invested only $9.5 billion over this six-year period. 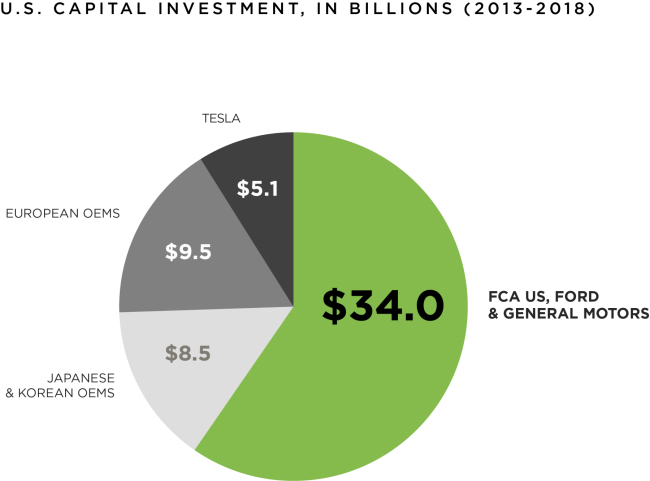 Building a new plant costs between $1 billion and $2 billion. Expanding a plant to allow for multiple platform production, or to take advantage of new process improvements, can cost several hundred million dollars. Both investments create jobs and help maintain America’s competitive advantage, but a new plant will generate hundreds of headlines, while existing plant improvements tend to go unnoticed.

@StateLineSinner Hi there. Feel free to send us a DM with your VIN and current mileage. I’d be happy to look into your order for you.

Watch #Stellantis executives talk about the company's plans for #CES2023 and our development of automotive #technology. https://t.co/nEI0E6sVSV

@LoyalChevyCust We would be happy to assist where we can, Terence. Please send us a DM with your VIN, mileage and contact information.
Privacy Policy: https://t.co/pB1n1lUCh7. The information you provide may be monitored and recorded and is subject to the GM Privacy Statement. -Ender https://t.co/qrfOZy6wQe